Seliani – a work of God and God’s faithful servants.  Today is the 25th Jubilee of Selian Lutheran Hospital.  We celebrate God’s blessings and faithfulness throughout these twenty-five years and also many more before that.  The story of God building this wonderful hospital is filled with faithful and generous servants from within and outside of Tanzania.

Selian Dispensary was started as part of the Arusha ministries of what is now the Northern Diocese of the ELCT headquartered in Moshi.  Construction began in 1952 and the first small dispensary (which is now the office of the Doctor in Charge) was opened in 1954.  Sometime later, an Maternal and Child Health building was added (the current Private Ward).

Services provided were those typical of the day.  Mother and Child clinics, routine outpatient visits for the common illness of the day, which were mostly malaria, pneumonia, diarrhea, and sexually transmitted infections 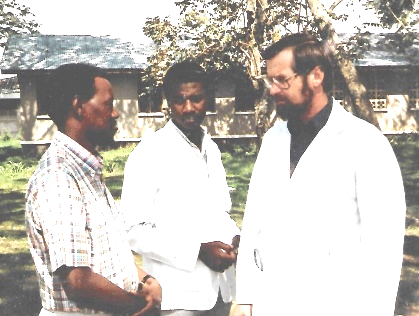 In 1976-1977, Dr. Raymond Rowberg, an American Lutheran missionary and Dr. Asheeli Mganga Kipuyo, the Medical Secretary to the Synod joined forces to start the Maasai Health Services Project (MHSP).  This program was aimed at training volunteer community health workers in rural Maasai communities to do basic first aid and treatment of the most common ailments as per protocols developed by the team.  Soon the team grew to a true team with the arrival of Dr. Elihuruma Nangawe in 1981.  Together they built a team of whom the core consisted of, Emmanuel Sitayo, Francis Shomet, Lazaro Mongoi, Erik Rowberg, and Sion Solomon.

The MHSP really was the main health work of the synod at that time as it coordinated work in the six dispensaries originally built by the Northern Diocese.  These were Selian, Gelai, Ketumbeine, Kisongo, Shambarai, and Orkesumet.

It was originally conceived that Selian should serve as a training site for rural community health workers.  And so it undertaken to construct a small maternity ward and inpatient center.  Rev. Stan Benson undertook the supervision of the construction which includes what is now one end of the maternity ward, plus the “hostels” and two staff houses.  In 1981, Dr. Nangawe became Medical Secretary and was based at Selian.

As the MHSP continued to expand to work in many rural villages, it was realized that no matter how much prevention was introduce, people would still need a place to go for more serious illnesses.  In the early 1980’s, Dr. Mark Jacobson, was invited as a medical missionary of the Lutheran Church in America.  He was already working in Nairobi at that time and so was invited to Arusha on many occasions to consider the future health work of the Diocese. Dr. Nangawe, Dr. Jacobson, and missionary Rev. Dave Simonson began to dream the dream of having Selian become a hospital to serve the Maasai and Arusha communities.

Rev. Simonson began to share this dream with friends and supporters from America.  One particular good Samaritan responded.  His name was James Buchanan, an attorney from Denver, Colorado in the USA, joined with Rev. Simonson to found a charity dedicated to the construction of a hospital at Selian Lutheran Dispensary.  In 1986, the Consortium for Comprehensive Community Child Care (C6) was founded.  Over the next decade, C6 became the driving force and major funder of the development of what is now Selian Lutheran Hospital.

With the blessings of Bishop Thomas Laiser, C6 raised support by inviting people to visit Tanzania and the work of the church to see for themselves the need and the hope for a quality hospital in Arusha.  Often times, they came on fund raising safaris where commitments were made to donate for successful climbing of Kilimanjaro or daring hikes across the Serengeti as Rev. Simonson and Dr. Jacobson did in August 1988. The building process began in earnest in 1988 with the construction of the Outpatient Department and Laboratory/X-ray Department.  Over the next eight years the Pediatric/Medicine Ward, the Surgical Ward, the Chapel, the Canteen, Surgical Theatres, a Generator Room, and even a Morgue were added.

Those who helped in sending their support through C6 and the church were so many.  Faithful Christians of the Lutheran Church in America gave their offerings to build it.  Friends of C6 climbed mountains and did walks to raise this support.  MHSP friends in the US were led by Dr. Raymond Rowberg’s son, Dr. Don Rowberg to help along this process.  Two pastors, Rev. Gary Langness and Rev. Ralph Olson got their congregations to pay for the chapel.  Rotary raised the funds to build the theatres in memory of Dr. Jacobson’s father, Reuben W. Jacobson.